Drupal’s Swiftmailer module is no longer supported as our site’s Status Report reminds us and also tells us that we must switch to Drupal’s Symfony Mailer. So what to do?

We switched from Drupal’s mailsystem and swiftmailer combination to Drupal’s new Symfony Mailer (symfony_mailer) on both Live and Dev servers whilst finding a simple solution to retaining our use of Mailhog to capture outgoing email on our Dev system.

Although I’ve gone into some detail below, making the switch really was quite straightforward. Those who’ve done Drupal theming before shouldn’t have any problems.

Why is this important to us?

In addition to Drupal’s immediate reasons for encouraging sites to switch from Swiftmailer to Symfony Mailer there are likely long-term benefits to be gained. The Symfony Mailer docs show that Symfony is looking at the broader picture by having integrated into its services some of the things, like DKIM signing for example, that we have to integrate into our postfix instance ourselves.

Drupal’s Symfony Mailer, with its current set of features addresses several scenarios for integration of the Symfony facilities into Drupal. But here I am only addressing the narrow issue of using Drupal Symfony Mailer’s Legacy Mode to get our use of Simplenews up and running with the new mailer.

We don’t use any third party mailing service like Mailchimp. We send email directly from our server’s postfix MTA. So testing the functionality and appearance of our simplenews issues is important to us.

To do this we use Mailhog (and thus mhsendmail) to capture emails on our Dev system. The Dev system runs in a Parallels virtual machine provisioned using our fork of Jeff Geering’s Drupal-VM which has Mailhog provisioning built in.

Our system deploys several Simplenews “issues” (distribution lists), key to the functioning of our community website. Although we send a low volume of emails, each one is important to us as several of our content types fulfil a statutary requirement.

We were keen to switch our Simplenews and site emails from Mail System and Swiftmailer to Symfony Mailer so long as we could do so with as few differences between Live and Dev configuration as possible.

History - and how we abandoned our previous approach

When we were using Swiftmailer, our Dev system’s php.ini was configured with:

Were we to use the default sendmail binary on our Dev system, attempts to send email into the ether would not be successful as connecting MTAs would reject them as eminating from the private subnet IP adddress of the Dev virtual machine.

Since Symfony Mailer’s Native Transport would use whatever was configured in the PHP sendmail_path this seemed the way to go.

So, that was our approach which we tried to maintain as we switched to Symfony Mailer at which point mailing produced no errors yet neither did it produce any email output! We tried various combinations of mhsendmail parameters ( -t -bs -i) with varying degrees of failure. Turns out that mhsendmail ignores all these flags anyway.

So, in the end, we could not meet our objective of having both Dev and Live Symfony Mail configuration use Native Transport. This is the approach we abandoned as it would seem that, in the nature of the sendmail-style interaction between the two processes (Mailhog and Symfony), each has different expectations of the other.

BTW you can check that mailhog is working at any time as mail sent from the Linux mail command should correctly invoke mhsendmail and messages then routed to the Mailhog Web UI for inspection. e.g.

We do have a workable solution that allows us to:

So the Sendmail configuration gets picked up in the Live system. However it gets overriden by SMTP in the Dev system because we do a config override in Dev’s settings.php thus:

We use Mailhog to be able to capture the email message and see whether it has the correct HTML and is formatted correctly according to our CSS.

Then, in the source markup of outgoing emails, we will see the names of the TWIG templates that Drupal is looking for when it is rendering a node.

For example, this is what we see in the Source tab of the Mailhog web page after having sent a Simplenews Newsletter:

Inspecting the above DEBUG information, there are several things to note here:

Symfony Mailer has its own template naming conventions, so we will need to rename the templates that we used with Swiftmail. For example, after switching to Symfony Mailer our site has templates named like this:

node--article--email-html.html.twig which is for our Article content type node being displayed in its email-html view.

And now we will probably need Xdebug to see exactly what data we are being passed in $variables so at this point I will refer those of you who, like me are without PHPStorm by choice or necessity, to a previous post where I describe how to simply deploy PHP 8.1’s Xdebug 3 with my editor of choice, Atom (April 2022).

As I mentioned before, it is necessary to import previously-used simplenews and swiftmail config settings into Symfony Mailer as a step in its installation process.

I haven’t completely got my head around the thinking and practice behind everything the Drupal module symfony_mailer does with its Policies but we can see that they get created when we follow the installation instructions and import existing configuration data. And we can see that some pretty clever analysis is going on. For example, since Symfony Mailer is concerned with all the component parts of a mail message (Body, From, Subject etc.), it creates Policy markup configurations for each of those components as they occur in our existing Simplenews configuration YAML.

In the example below see what Symfony Mailer has picked up from Simplenews during import:

… whilst retaining a dependency on the Simplenews configuration item simplenews.newsletter.councillors

And Drupal’s Symfony Mailer GUI allows us to edit what we have imported. 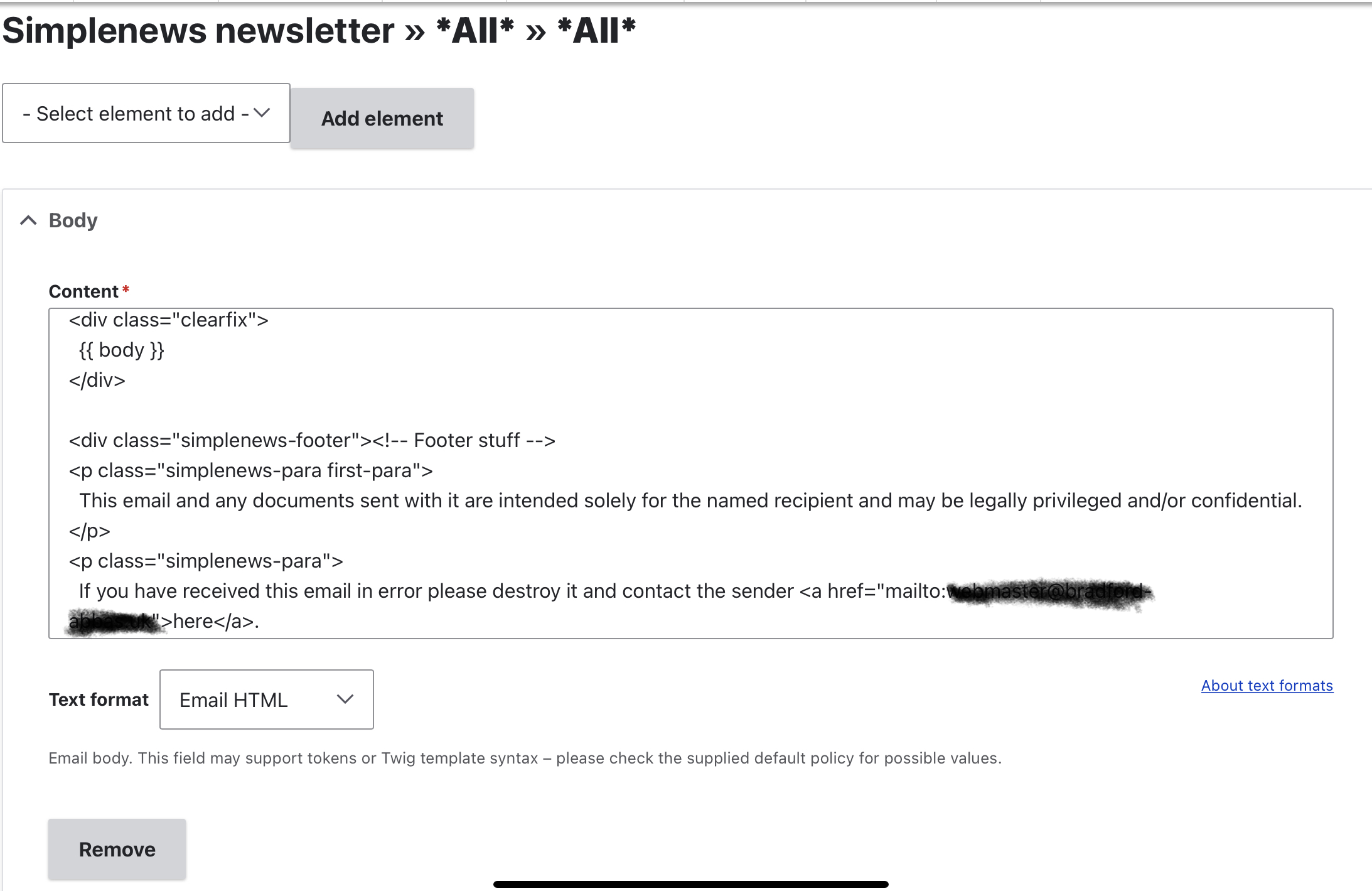 Drupal’s Symfony Mailer alpha release doesn’t yet have every facilty that every Simplenews user will need. (Have a look at the Legacy TODO list) but running Dev tests gave us confidence that we could go live with the alpha. Something others will also consider carefully.

If your own experience would help improve this article, then do please leave a comment below. Thanks.